Once upon a time there lived an old woman in a thatched Hut. Her vision was too poor and she lived in the hut alone counting her last days. She used to make rotis in the morning and had it all day long. One such afternoon, when she was eating her rotis there, came a dog by name Ramu which was trying to snatch her roti. The old woman tried her best to scare away Ramu but the dog didn’t listen. Since she was too old she finally gave up and the dog took its roti. The dog went away with a happy face and the roti in it’s mouth. 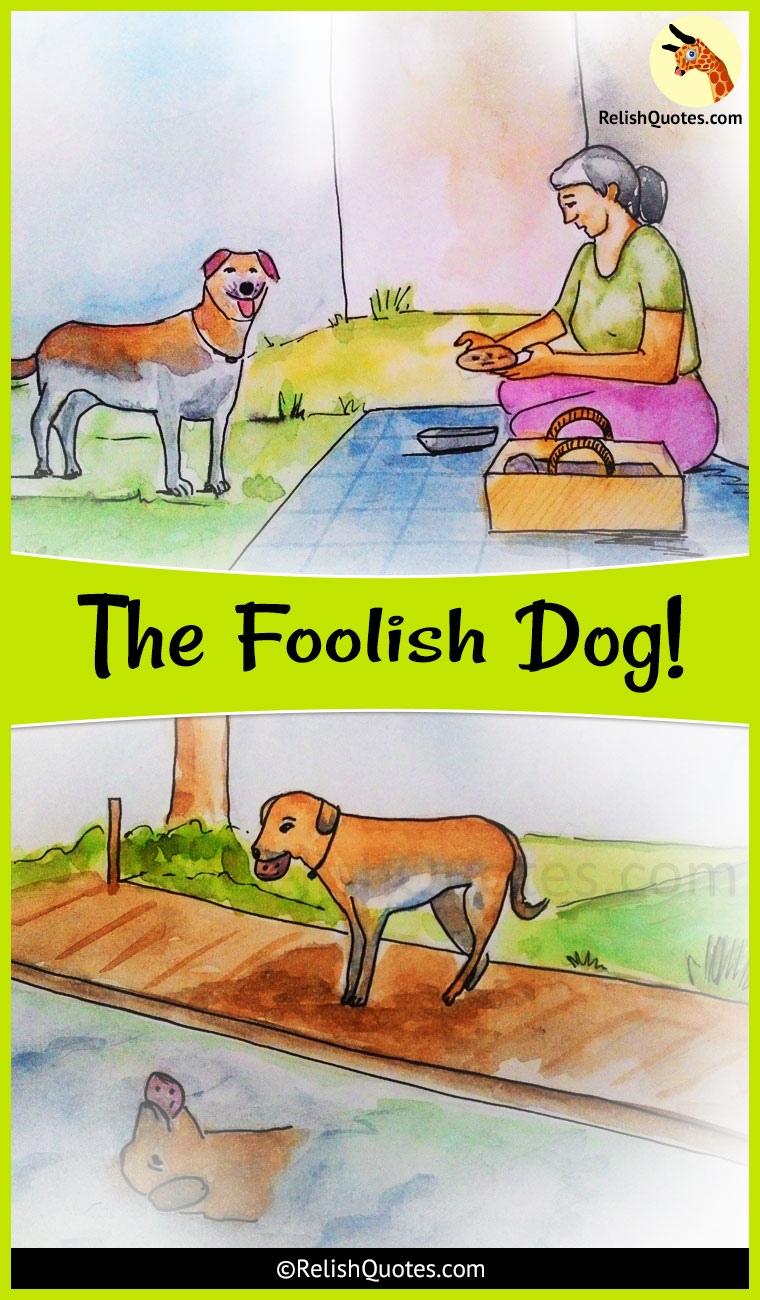 But there was a hitch again. There was a small stream of river and Old Bridge. The bridge was too weak and Ramu wasn’t sure if it could withstand the weight. As he was left with no other option, he decided to cross the bridge. While he was crossing the bridge, he looked at the river and could see another dog that is floating in the river with a roti in its mouth. Ramu instantly started feeling greedy and wanted the other Roti too. The hot scorching sun added to its greediness and appetite maybe.. 😛 Ramu continued walking on the bridge and so did the other dog that was floating on the river. Ramu was startled to see the other dog which was also walking along. Ramu started feeling that the other dog was trying to mock at Ramu. When Ramu gave a furious look signaling the other dog to go away, the other dog looked furiously back at Ramu. Ramu was fuming with anger and gritted his teeth. The Other dog did the same. Now Ramu was sure that the other dog wanted to pick up a fight. Ramu thought to himself, “I am not amongst the ones who get scared and go away. I shall fight back the dog and go and eat my Roti peacefully”.

By thinking so, Ramu started barking. The Roti that was in Rama’s mouth fell in the river and soon Ramu could see the image of another dog shattered. It was only now that Rama realized that the other dog was none other than his own reflection. All his efforts for getting the Roti finally went in vain. Ramu had to go back with the sad face. He felt utterly foolish about his behavior and cursed himself for thinking that his own reflection was some other dog. He wished he could have thought a little more before he started barking. But there was no much use of regretting now as it was too late and the Roti was already long gone. There was nothing much he could do about it now.

Ramu had learned his lesson.

He learned the importance of thinking before getting into action. The fights he had with the old woman and the other stray dogs had no meaning at all now. He learned that just one foolish action could ruin a lot of efforts. If he had shared his Roti with other dogs he atleast could have a piece for him. Moreover, he learned that thing that was stolen from the poor and needy never turns fruitful.

Now he was left with no other option and had to go home with the hungry stomach. He went home with a hung face and a lesson for life!