It’s Never Too Late to Confess Your Love!

It was 7:15 in the evening when I was eagerly waiting for Anchal to join me. I had got my seat in the bus. No one came to drop me to the bus stand as none in my family was willing to send me to Mumbai for higher studies in music. I wasn’t sure if my future will be secure by choosing to continue in the field of music. But for me, music is everything! I sing when I’m too happy.. I sing when I’m too sad! That’s how much music meant to me. As I sat there waiting for my friend Anchal, there were thousands of thoughts crossing my mind. 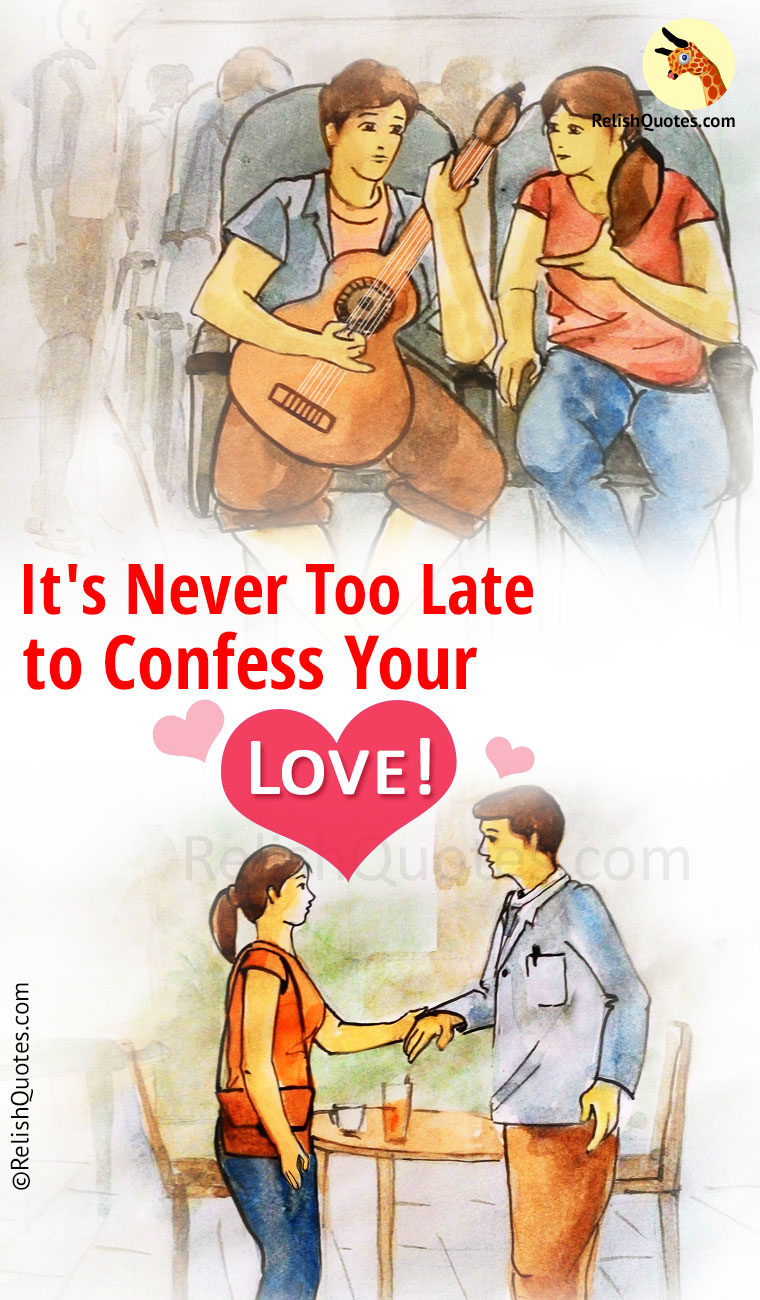 I just followed my heart and nothing else. When I was deeply lost in my thoughts, I could see a small fight that was happening in my bus. There was a tall guy who was having an argument with a middle aged aunt as she stumbled upon him and broke one of his guitar strings. He was very furious with her. It was evident he loved his guitar a lot. He came and sat next to my seat. I told him that I had reserved that seat for my friend Anchal. When he was ready to vacate the place, I stopped him telling he could sit there until Anchal comes.

I spoke to him about the guitar fight and that’s when I realized he was going to Mumbai for the same reason. I was excited and we started exchanging our thoughts about music. His first lessons, his music teacher, his guitar classes coach and so on. He was very happy to know that I had learnt Hindustani classical music too. He said he missed his taxi and that’s why he boarded the bus. He was going to the hostel of the same college. As we were speaking, I almost forgot I was waiting for Anchal.

It was too late now and the bus would leave within a couple of minutes. I called up Anchal. She didn’t pick the call. Her brother picked up the call and told, “Hey Paayal, Anchal will not be able to come with you. Dad stopped her from joining the college. She’ll get married within 2 months. You take care. Bye”. I felt sad for her. I also felt sad for me. I had to start my journey all alone in an unknown city. The city of dreams – Mumbai. I just hoped it was my city of Dreams-come-true. Fingers crossed!

“Ah..By the way..My name is Utkarsh. And you are…?” I came out of my thoughts and told, “I’m Paayal. I was waiting for my friend. Turns out she can’t come to Mumbai.” He felt sorry for her and we continued our conversation about our music interests. He said he’ll surprise me by playing guitar in the evening. I thought I’ll be the one who would surprise. We stopped at a hotel for dinner in the night. The hotel was pretty unclean and I decided to eat in the bus. Utkarsh too made same plans. I had got dinner. We ate our dinner and he started playing his guitar.

I was wonderstruck by the way he played it. It was amazing! I have been to the best of guitar concerts but this one seemed very different and special. As he sung, I was carried away by his voice. A voice that reached my heart. Suddenly I realized my heart was beating so rapidly. I was thinking I would skip a beat now! I couldn’t figure out what was going on! I was mesmerized by his voice mad guitar playing skills. I was touched. I constantly looked into his eyes as he played. The expressions he gave while playing too made my heart skip a beat. I don’t know what was happening with me. When he was done playing, all I told him was, “Hey! You sing pretty well”. I told myself, “Pretty well? Like seriously? He just made you skip a beat and all you had to say was ‘pretty’ well”. I brushed those thoughts aside when he forced me to play my favourite tune. I never backed out from playing guitar.

But this time, something was stopping me from playing it. I was too nervous..Or may be excited.. As he said “What are you thinking? Come on! Show me how good you are at playing guitar!”. I told him there was problem with my voice and I’d sing some other time once we reached college. He consented. I didn’t know why I lied to him. I just felt too nervous to sing or may be I didn’t want him to feel I was bad at it as I hadn’t practiced any song.

The whole night I couldn’t sleep. All that was running in my mind was Utkarsh. I couldn’t figure out if it was his guitar playing skills or Utkarsh himself that made me think.of him again and again! After the bus reached Mumbai in the early morning, both of us took an auto till our college. Once we reached college, we parted ways as our hostels were located in 2 different buildings. He reminded me about my promise of singing.

I said, “Yup. Surely”. I was too timid to ask him for his number. I expected him to do so. He didn’t! I spoke to myself, “How could you not ask his number? How will you meet him again?”. I didn’t know how! But I knew that he had had a great impact on me. There was something very special in him that dragged me towards him.

I met him in the canteen the very evening. This time I had made up mind to fetch his number. I asked him directly, “Hey Utkarsh, I needed your number!”. We exchanged our numbers. I sang for him in the evening and he was totally mind blown. He whispered into my ears, “You’re beautiful and so is your voice! Loved it”. I didn’t know how to react to that. I just smiled and left. He kept looking at me until I was out of his sight. Every time I turned back, his eyes were fixated on me.

Anchal called me up that night and I told her about Utkarsh. She didn’t seem excited. She said, “Paayal, you have joined the college to study music not to fall in love. Be careful. Do not assume he likes you too. It’s just a new friendship. Don’t take things so fast. Be patient and don’t be too desperate about him. Might be it’s just a crush. Careful lady, don’t lose your mind”. I said, “Yup Anchal. Goodnight”. I knew she cared for me! But at the same time, I couldn’t resist or deny the fact that I was falling for him. Days passed by and everything seemed magical. I did amazingly great at my classes. Our teacher was very impressed with me. I was made the team leader of tiny singing troops and I represented my college in a couple of inter college events. Utkarsh became closer to me every day. By this time I had realized that what I felt for him was not temporary! It was a true feeling and I was confused if he had same feelings for me. The signs were subtle!

Sometimes, he would listen me sing whole day, sometimes he would turn me down telling he was sleepy. I loved his company and both of us loved to hog at the streets of local Mumbai. We would go out in the evenings and get back by night. He understood me. Every bit of me. We had built a great understanding with each other and we seldom fought. Even when we fought, we never hated each other! It was over 6 months now and there were 3 more months left to complete the course. I knew he had cast a magic spell on me but I was afraid to confess. One thing that was a hindrance to me was the lessons Anchal taught me about guys. As she had brutal breakups in her life, I had heard to many of her unsuccessful love stories. I didn’t want mine to be one! I was too scared to confess fearing rejection. Sometimes I thought, “Might be he’s just being a sweet guy friend. Might be I’m just assuming he loves me!”. It was an internal fight.

There were also other friends at my hostel who disapproved the idea by telling, “Come on Paayal, it’s usually the guys who confess. Give it some time, he surely will”. I waited for 2 more months. I started feeling he loves me but was holding back. I somehow was in hunt of clear signs. I read a hundred blogs telling, “Clear signs he loves you..” and the like but nothing seemed convincing!

There were only 3 days left for my college to end. I had got selected by top music production companies in Mumbai. Utkarsh too was short listed by best companies. We weren’t sure if we would ever meet again. I was still thinking if I should confess. Like the 9 months, 3 days too passed so soon! None of us had confessed till now! When he bid bye and boarded his bus, I felt like I was missing the train of my life.. (Yes yes, fan of Jab we met!). As I was still thinking, the bus left! I was still bidding and soon his bus was out of sight!

I moved to Pune where I worked for a music production company. His thoughts never left me alone. I was mostly occupied by his thoughts! I had to admit.. I missed him terribly! It was my first love! May be my first love at first sight too! I thought I was being stupid. It was enough now! I decided to confess! I saw no wrong in confessing love! In fact I liked the idea. I thought to break the stereo types and propose him. I called him up and we decided to meet at one of our favourite places in Mumbai. I left from Pune and he left from Nagpur.

I met him and hugged him right after I whispered how much I missed up. I broke the awkward silence that followed and confessed my feelings towards him. I went on my knees and proposed him. He cried in joy! His smile told how much he loved me. He backed out because he was too timid. He wasn’t sure if I loved him just like I did! Finally, he was so happy. He said he was the luckiest guy to have me! He was thankful that I made up my mind to confess. If I hadn’t, may be we would never meet each other again! I was glad I realized it was not too late to confess!

When your Love towards a person is real, don’t back out from confessing! Don’t have second thoughts about it because you’ve got nothing to lose. You might get lucky or you’ll have a bad experience! You’ll at least not curse yourself the entire life for not confessing your love. The thought of missing your train will never bother you again! When it’s true love and you know the person is worthy of your love, it’s never too late to confess! Go on and confess your love!