Jealousy is Unhealthy – How I Learnt My Lesson!

I was raising with rage in the lunch hour that day. I didn’t want to speak to anybody as it was an insult to me that I didn’t get selected as the captain of the shuttle badminton team. My best friend Navya was chosen as the captain of the team. I was too angry in my sports teacher as I felt I deserved to be captain. Besides, this year we also had too many interesting school competitions and I’d prepared enough to be the captain. 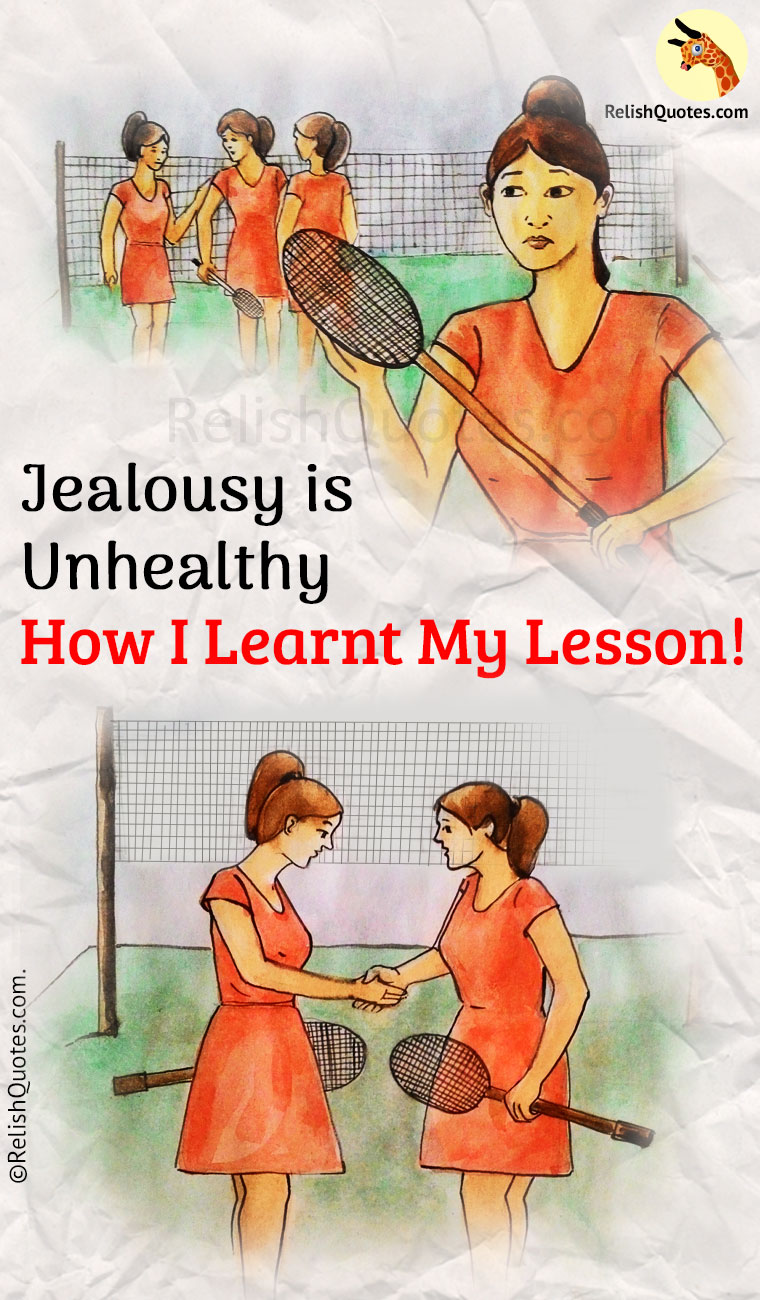 Navya was jumping with joy and my friends were congratulating her. I was lost in my own internal battles that were running in my mind, “How can you be jealous of your own best friend? You’re a cheap headed girl, Adya! No! I’m not jealous of her. It’s just that I’m sad because I feel I deserved the post….” and so on. As depicted in ‘3 Idiots’ movie, I was actually wondering what was the reason behind my sorrow? Me not getting selected as the captain or my best friend getting selected as the captain?
Anyways, I concluded that I was sad and ordered a Coke. Navya came to me and told how happy she was to be selected as the captain of the team! I gave a subtle smile and told, “Congrats buddy!”

We girls, we can never admit we are jealous!

Days moved on and we started practicing for the inter school competitions. Navya was training pretty well. Although I always used to think that I can train the team better than her. I was too intolerant towards her. The moment she said anything like, “Adya, that’s not how you do it. You need to attack the back court…” and so on, I would tell her, “Navya, I know how to play it. Just because you’re the captain doesn’t mean you’re the best at it. I can do it. We are a team. Don’t guide me so much”. I could notice that my other team mates weren’t liking this kind of behavior from me. I was least bothered about it anyways.

Soon the date of inter school competition was announced. The sports teacher asked us to start our final practice and told that we’ve got to make it to the national levels this time. My school was always knocked out at the state level badminton tournament. Navya had taken this way too seriously and she motivated all of us to give our best. But then, she knew deep inside that I wouldn’t consent to everything she says. She didn’t treat me badly either. All she would do was to gently tell me, “Hey, I know your a great player. But please follow whatever I tell … it is in the interests of the entire team”. I would nod my head unwillingly. Every time we played doubles, I never co-ordinated with her well. If she told me not to receive the shuttle cock as it would be considered foul, I still would do it telling, “I’ve more experience than what you have. I know how to judge it”. My team mates told me what I was doing was wrong. They advised me to follow her commands and strategies as she would be drawing all of them in the best interests of the team members.

I told them, “All of you can follow the commands of your captain. I’m better experienced  than all of you, I’ll handle it myself”.

The most waited date had finally arrived. We all were all set to play and win the championship level by level till we reach the national levels. In the first match, as usual, Navya guided us with some tricks. I was too intolerant towards her even then. I don’t know why she felt that I was the right person to go first. I went. I started playing by applying my own methods. I didn’t follow any guidelines that was given to me by captain. I was too stubborn on proving that she was the WRONG captain. My tricks didn’t work in my favour. I lost the first match.

Navya had soon realized something. She just ran to my sports teacher. I thought she’ll definitely complain about me telling I didn’t follow her guidelines. After 5 minutes, my sports teacher called me. I went to him fearing that I’m fired from the team. But what happened next shocked me! He told me, “Adya, your captain Navya wants you to be the captain from now on. She says she’s not capable of handling your team. So you are the captain from now on. Go take charge of your team and boost your team’s spirit”. I didn’t know how to react!

I felt so stupid about myself. I was too jealous of her and was unwelcoming towards all her efforts and there she was who was ready to give up her captain post because she wanted the team to win.

It was a realization moment for me.

I went to Navya and before I could speak anything, she told me, “Hey! Congrats pal! You’re now the new captain. Forget whatever happened Adya. It’s fine. You don’t even have to be sorry. I’m your best friend and I’m proud that you are the captain of our team. Go on! It’s time to show our team spirit!” I didn’t have too much to speak. I just told her, “I’m sorry Navya. I was jealous of you. I’ve learnt my lesson. Thank you.”

Later, I told all my team members about my behavior and apologized to everyone. I told them that captain post is just for formality sake. All of us were equally talented. We made plans together as a team and executed them. We won that tournament and with the same energy levels we also made it to the district level, state level and finally the national level too! I became indifferent towards the concept of captain post and saw it more like a mere formality. I knew that a team can succeed when there’s co operation and team spirit. I know that it was not me, but our team spirit that led us till the national levels.

I took home an important lesson that day.

Jealousy is unhealthy for everyone. By being jealous of someone, you’re not only hurting the other person but also putting down your own positive spirits. I promised myself that I’ll never feel jealous of anyone again! For my own good and everybody’s good!

Please log in again. The login page will open in a new tab. After logging in you can close it and return to this page.